In the Power of the Gods article I had originally included a piece on the tuning fork like structures that appear around the perimetre of the Twin Towers. In that piece, which is now deleted, I said that the tuning forks would resonate in the GHz range. The reason I said this is because I am really terrible at mathematical equations. At such a frequency steel is highly reflective and would have no cause to resonate. Without further ado here is the revised addition.
Jake Kotze beat me to publishing on this one, but he, and others, appear to have missed some vitally important clues in the tuning fork issue that makes any of it truly relevant. In the Power of the Gods I mentioned how the Giza Pyramids are dimensionally proportional to the World Trade Centre complex.
Here is a group of lists comparing how the Giza Pyramid Complex relates to the World Trade Centre Complex; 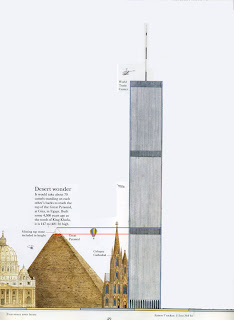 Comparison of the Great Pyramid of Khufu and the North Tower WTC 1
Comparison of the Chephren Pyramid and the South Tower WTC 2
The base area of the North Tower is one thirteenth the size of the base area of the Pyramid of Khufu. Thirteen was a sacred number to the Ancient Egyptians. There was even a sculpture by Japanese artist Masayuki Nagare of three pyramids in the Plaza of the Twin Towers. 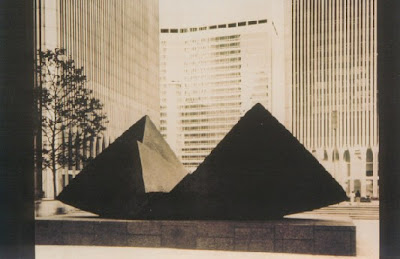 Yamasaki, the architect of the World Trade Centre, was influenced by Islamic architecture.
"Yamasaki described its plaza as 'a mecca, a great relief from the narrow streets and sidewalks of the surrounding Wall Street area'." "At the base of the towers, Yamasaki used implied pointed arches--derived from the characteristically pointed arches of Islam..."[1]
There is an occult relationship between the pyramids and the Twin Towers that Yamasaki fails to acknowledge. The cultures of Islam and Ancient Egypt are not too dissimilar, however, as they both stem from the same region on earth. 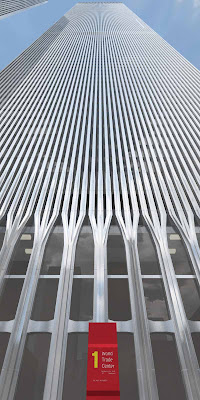 Yamasaki designed the outer columns of the towers to look like implied Muslim archways. But considering the surreptitious flow of Egyptian symbolism in the World Trade Centre we can look deeper than this explanation alone. The implied Muslim arches are in fact tuning forks. I have never heard of three pronged tuning forks either, but I suspect they enrich the quality of the note rather than diminish it. It is very likely that three prongs were chosen as a consequence of the huge structural loads these outer-beams helped hold in place.
The natural resonant frequency of a freestanding, 405 metre tall, steel tuning fork is 10.7372 Hz. This is not far off from the official 10 Hz figure for the entire building; in this case WTC 1. It is interesting that smaller components within the structure would share their resonance frequency with the superstructure.
This begs the question: Was there a fractal resonance built into the WTC towers? It would appear to be the case since the 2 pronged design of the Twin Towers is tuning fork like in design anyway. This means that if, for example, Tower 1 began vibrating at its natural harmonic resonance Tower 2 would eventually follow suit through the action of sympathetic resonance. The whole structure would be resonating like a monumental tuning fork, comprised of lots of smaller tuning forks.

This fractal resonance might play a part in contributing to the unusually high harmonic resonance of the Towers. Most high rise buildings are between 0.2 Hz and 2.4 Hz. So the 10 Hz frequency of the towers is very high in comparison.


The reason I say that these structures are tuning forks and not tridents, as proposed by this researcher, is because tuning forks played a key role in Egyptian medicine and pyramid construction. Below is an Egyptian hieroglyph of two sympathetically resonating tuning forks from the Metropolitan Museum of Art.

One interesting account of a girl who broke into a museum store room and uncovered boxes of Ancient Egyptian tuning forks can be found here. A few points worth noting here; the tuning forks were made of steel, just as the Twin Towers were, and they had "a taught wire stretched between the tings of the "fork.""
On the August 6th 1974, Phillipe Petit and his crew joined the Towers for the first time in history by rope. At 7:15 the following morning he proceeded to walk across it eight times. August 6th is Horus' birthday. When asked why he did it Phillipe replied, "There is no why." This rather flatly snubbing statement must have influenced Smashing Pumpkin singer Billy Corgan in writing a song called Here is no why. The song itself appears to be about a forlorn Clam Rock star and contains the line, "the lonely towers of long mistakes." What it means I don't know, but Billy Corgan has appeared in other articles I have written and its seems that he is aware of something to do with the secret orders. 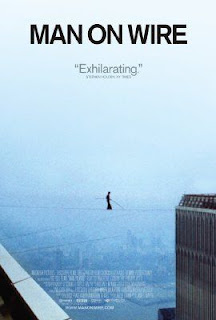 Finally in the film Transformers 2; Revenge of the Fallen a giant tuning fork-like machine that can destroy the sun is found buried under the Pyramid of Chephren. The movie is replete with tuning fork and Egyptian symbolism, not to mention references to 9/11. If you remember in the Power of the Gods I talked about the 9/11 ritual timing being based on the time it takes light to travel to the sun and back. Now, here we have a machine that is not only buried under the Twin Towers' Egyptian precursors, but is created to send energy, in whatever form, to the sun in order to destroy it. 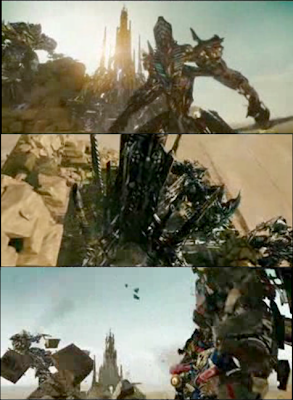 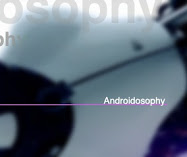 Everything you ever wanted to know about Androidosophy, and were then afraid you ever asked.